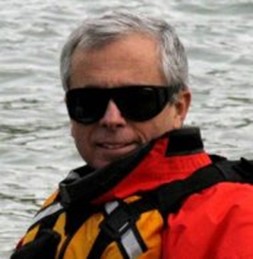 Peter Clark discovered the pleasures of paddling surf skis and long boards in the mid '60s, whilst an active member of Bondi S.B.L.S.C. (Surf Bathers' Life Saving Club), where he also rowed as stroke in both the junior and senior 'A' boat crews.

In 1972, he joined the Nepean Canoe Club and extended his passion for paddling to include building fibreglass kayaks, canoes and wave skis.

He is also a PADI qualified SCUBA Rescue diver.

Pete's passion for sea kayaking and strong commitment to customer service, coupled with his vision of building a professional operation to support this rapidly growing sport, led to the founding of Kayaking World in early 2005.

Pete has paddled extensively in New South Wales, Tasmania and the Whitsunday Islands off Queensland. He has also paddled in the waterways of New Zealand, Austria, Germany and Sweden.

In 2007, Pete gained accreditation as an Australian Canoeing Kayak Instructor, and he has served as President/Chairman of NSW Canoeing Inc.

In 2013, he completed Bob Cooper’s Advanced Outback Survival Course in the Pilbara region of Western Australia.

Pete spent most of his business career in senior executive management roles in Sales & Marketing, and held positions from product management through to CEO. He has also lectured in Entrepreneurial Management & Small Enterprise Management at Western Sydney University and in Sales Management, Industrial Relations Management and Direct Marketing at Hunter Institute of Technology.

He is a Fellow of the Australian Institute of Management.

In addition to his civilian roles, Pete was Commissioned as an Officer in the Australian Army in 1986 and served as a platoon commander of 103 Field Workshop in the Royal Australian Electrical & Mechanical Engineers (RAEME), and later as Second-in-Command of the Main Divisional Signal Squadron of 8 Signal Regiment, (RASIGS).

Peter Clark is a Justice of the Peace in and for the State of New South Wales.